Cargill (United States), one of the largest food companies in the world, and the MV Cargo company, which operates in the Yuzhny commercial seaport (Odesa region), signed an agreement on purchase/sale of shares, which provides for construction of a grain terminal, on Wednesday, 24 February. The agreement was signed in the Cabinet of Ministers of Ukraine.

This agreement will enable MV Cargo to start construction of the terminal.

United States Ambassador to Ukraine Geoffrey Pyatt said that cooperation between Ukraine and the United States would broaden. "This is just the beginning of the arrival of the American investments that we discussed at a meeting with (United States Vice President) Joe Biden last summer," the ambassador said.

According to Minister of Infrastructure Andrii Pyvovarskyi, 350 new jobs will be created during implementation of the project and the new facilities will increase the capacity of the Yuzhny seaport to 5 million tons. Minister of Agrarian Policy and Food of Oleksii Pavlenko said it was impossible to increase grain exports without large investments in port infrastructure.

"Cargill will provide the cargo, we (MV Cargo) will perform the construction work, and the Ukrainian Port Authority should ensure dredging – memorandum signed," said Andrii Stavnitser, an investor in MV Cargo. Stavnitser is also the CEO of the TIS stevedoring group, next to which the new grain terminal will be built.

As reported, the Ministry of Infrastructure signed a tripartite memorandum of intent to implement an investment project at the Yuzhny port on 15 August 2015. The document was signed by Cargill’s CEO Martin Schuldt, the Administration of Seaports of Ukraine’s Chairman Andrii Amelin, and the MV Cargo company’s Director Oleksandr Prymak.

On 27 October 2015, the European Bank for Reconstruction and Development (EBRD) announced that it was considering providing a loan of up to USD 37 million to the company MV Cargo Ltd. for financing construction of a grain terminal at the Yuzhny port.

According to Pyvovarskyi, the International Finance Corporation is also ready to join the project. "If the terminal is built, the rail capacity that we have created at the Yuzhny port – 52 pairs of trains – will no linger be sufficient, and it will need to be expanded," Pyvovarskyi said.

The amount of planned investment is about USD 130 million. The parties will have to start implementing the project within one year after the signing of the agreement. The terminal is scheduled to be launched in 2017. 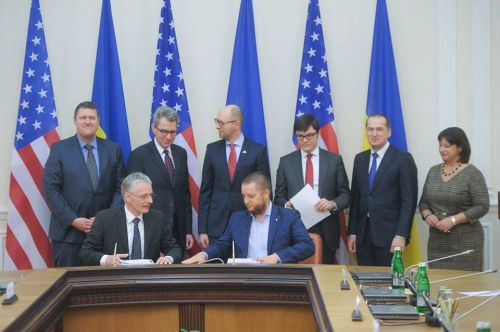