Application of road markings made of cold plastic began in Ivano-Frankivsk on Tuesday, residents of the city and Facebook users reported.

The new technology is used to mark pedestrian crossings on major streets, where there is heavy traffic.

The work is performed during the day because the technology requires a specific temperature and humidity.

According to Ivano-Frankivsk’s Department of Public Utilities, Transport, and Communications, two road crews are currently working on the city’s Halytska Street.

As reported, plastic road markings were previously introduced in Lviv, but there are differences.

"In Lviv, the plastic markings have a smooth surface, but the ones here have an agglomerate structure. It has proven to be better in practice. It is less slippery, headlights are refracted better and reflected at different angles at night," Nazarii Rohiv, a representative of Ivano-Frankivsk’s Department of Public Utilities, Transport, and Communications, to the Vikna internet-media. 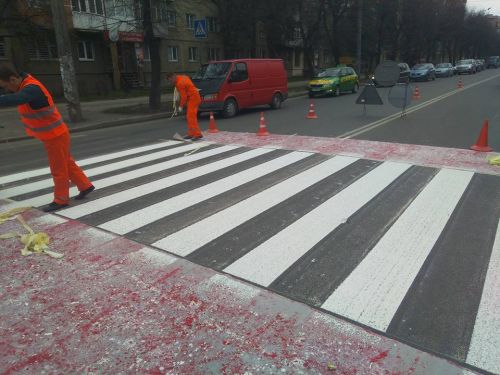