The Kiliya shipbuilding and repair yard has launched a new barge (No. UDP-SLG-021). The official launching ceremony took place at the shipyard on May 30, the CFTS correspondent reports.

"Construction of the barge began in October 2016. We wanted to complete it by the end of last year, but the weather made some corrections. River Danube was frozen in January and February, and there was no navigation on the river. We were forced to postpone the construction work. In general, a barge of this type can be built in three months," the Ukrainian Danube Shipping Company’s head Dmytro Barynov told the CFTS correspondent.

The Kiliya shipyard plans to build another barge of this type this this year.

Twenty SLG barges were built at the Kiliya shipyard during the period of 2001-2005.

As reported, the Kiliya shipyard launched a 76-meter barge with a carrying capacity of 2,098 tons, which was built in 2002, in April this year. 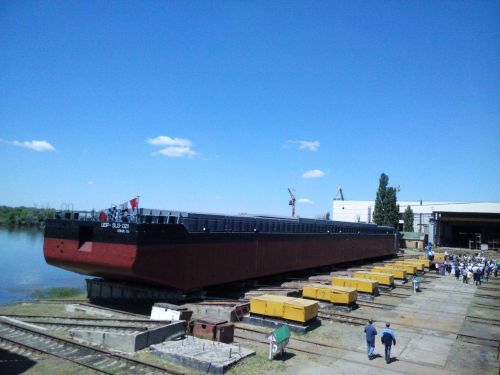