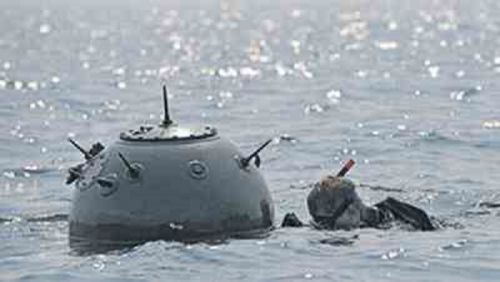 The Ukrainian Ministry of Foreign Affairs has stated that the Russian Federation has been increasing the illegal activities of its naval forces in the Black Sea since the beginning of its large-scale war against Ukraine. According to the ministry, Russia has come up with a new method of maritime piracy – the use of sea mines as uncontrolled drifting ammunition.

As the CFTS portal reports, the Ukrainian Ministry of Foreign Affairs noted that such drifting mines were discovered off the coasts of Turkey and Romania on 26-28 March 2022.

"The results of an identification established that these are sea mines that were not registered with the Ukrainian Naval Forces at the beginning of 2022.

“These mines were captured by the Russian armed forces in 2014 during the Russian invasion and temporary occupation of the Ukrainian city of Sevastopol. Consequently, Russia is deliberately resorting to provocations and discrediting Ukraine in front of its international partners, using sea mines from the military depots that were seized in 2014," the Ukrainian Ministry of Foreign Affairs said in a statement.

According to the statement, Russia is seeking through these actions to hide its illegal activities in the Black Sea, which violate the principles and norms of international maritime and humanitarian law, and to avoid responsibility for war crimes and maritime piracy.

The deliberate use of drifting sea mines by Russia turns them into a de facto indiscriminate weapon, which threatens primarily civil navigation and human life at sea not only in the Black Sea and the Sea of ​​Azov, but also in the Kerch and Black Sea straits, the Ukrainian Ministry of Foreign Affairs said.

"Ukraine insists that Russia should be held internationally responsible for the commission of illegal acts in the Black Sea, war crimes, and, in particular, the use of sea mines as an indiscriminate weapon that is spread uncontrollably in the Black Sea.

“In fulfillment of its international obligations, Ukraine has notified the International Maritime Organization about the use of drifting mines by Russia in the Black Sea – including during an extraordinary session of the Council and within the framework of the IMO Legal Committee – as well as its international partners through the channels of the channels the international automated service (NAVTEX)," the ministry said.