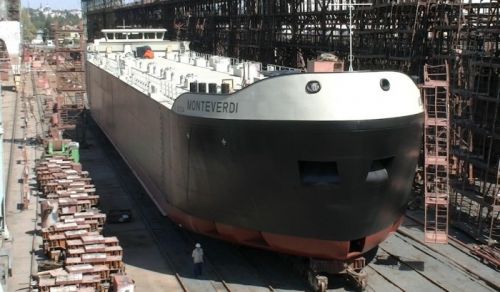 The Smart Maritime Group (SMG) ceremonially launched the hull of the fourth chemical tanker to be built for Veka Shipbuilding (Netherlands) on September 11.

The tanker hull was built at a shipyard in Kherson under a contract with Veka Shipbuilding. General ship piping systems and deck equipment have been installed and the hull has been painted. The order for construction of the taker hull was completed in six months.

After completion of the outfitting work on the tanker hull, it will be sent by sea to Veka Shipbuilding in the Netherlands.

The contract for construction of the tanker hull is valued at EUR 2.7 million.

About 1,200 tons of high-quality shipbuilding steel, most of which was produced at the Metinvest company’s Illich iron and steel works MMK and the Azovstal steel plant in Ukraine, was used in the manufacture of the vessel’s hull.

According to the Smart Maritime Group’s CEO Dmytro Krasnikov, the company plans to continue cooperating with its Dutch partner because it is satisfied with the quality of this and the previous three orders.

The Smart Maritime Group has built 12 tanker hulls for Veka Shipbuilding in 10 years.

As reported, the third tanker hull that the Smart Maritime Group built for Veka Shipbuilding was launched at the Kherson shipyard on 28 January this year. The vessel was named Synergy. All the tankers of this series have a length of 110 meters, a width of 13.5 meters, a hull height of 6.6 meters, a hull weight of 1,200 tons, and a cargo capacity of 5,320 tons.

The hulls of the Aimee and Emma tankers were launched simultaneously in Kherson and Mykolaiv on 15 March 2019.

14:38 Over 55 Million Passengers Transported By Rail In Ukraine In First 8 Months Of 2021
10:42 First Direct Container Train From Ukraine To China Departs
13:13 Kryukov Railcar Works Testing Wagons For European Market
13:04 Kherson Commercial Seaport To Be Transferred To Concessionaire By End Of Year
16:10 Ryanair Could Base Up To 20 Aircraft In Ukraine
All news