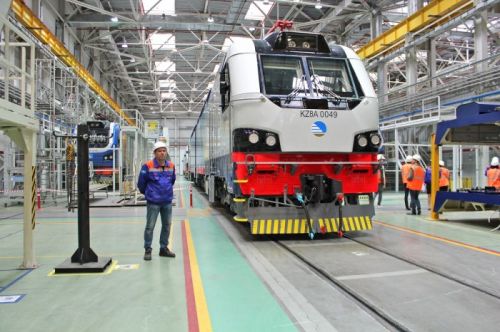 Alstom, a French manufacturer of rolling stock, has announced the signing of a Ukrainian-French intergovernmental agreement on financing the purchase of electric locomotives for the Ukrainian Railways joint-stock company (Ukrzaliznytsia), the CFTS portal reports.

According to the company, the agreement is a step towards a future project for supply of modern locomotives that meet the needs of the Ukrainian railway market.

In addition to supplying locomotives, Alstom will be able to provide the entire range of associated maintenance services at Ukrainian railway depots.

"To meet Ukraine’s request, Alstom is ready to localize up to 35% of its production and subsequent maintenance in Ukraine. For a project of this scale, it is necessary to involve several of Alstom’s French plants, particularly Belfort, where the global center of excellence for Alstom locomotives is located, as well as Ornans, Tarbes, Le Creusot, and, Villeurbanne," the company said.

"Due to its geographic location in the European and Eastern corridors, Ukraine has adopted the appropriate strategy to improve its freight transportation and revenues. The ever-increasing electrification and modernization of its rail network are in line with this strategy," Alstom added.

“Alstom recognizes the strong potential of the Ukrainian market, and we would be proud to participate in the expansion of the country’s rail infrastructure. With hundreds of electric locomotives designed, manufactured, and sold worldwide, as well as an extensive maintenance experience, Alstom has the capacity to implement such a project. It will further strengthen our position in the heavy locomotive segment," said Henri Poupart-Lafarge, the company’s CEO.

"The support for the project for modernization of Ukrzaliznytsia’s electric locomotive fleet at the government level sends a signal to our company that the shareholder – represented by the Ukrainian Cabinet of Ministers – is taking decisive steps to support the solution of the railway industry’s pressing problems. It also sends a signal to the national economy that the government’s work is aimed at developing Ukraine’s economic potential and strengthening the country’s transit position," Ukrzaliznytsia’s Board Chairman Ivan Yurik said.

Alstom plans to offer Ukrzaliznytsia its Prima T8 locomotives, which are capable of carrying up to 9,000 tons of freight and traveling at a speed of 120 km/h.

As reported earlier, the Ukrainian Parliamentary Committee on Economic Development’s deputy head Dmytro Kisylevskyi said in March this year that the Ukrainian Ministry of Infrastructure had informed him that the approximate level of localization of production of the locomotives, the purchase of which was being negotiated with the Alstom company, would be 15%. However, according to him, the Ukrainian Federation of Employers believes that Ukraine is capable of ensuring 50-55% localization of production of imported locomotives, with subsequent increase of the level of localization within 2-3 years.