Ukraine’s Minister Oleksii Honcharuk met with representatives of the Deutsche Bahn company, the largest railway operator in Germany, in Kyiv on January 16. 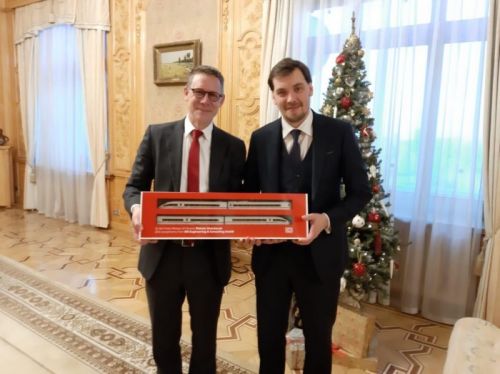 He did not provide details.

As the CFTS portal reported, Deutsche Bahn is working on a strategic partnership with the Ukrainian government and Ukraine’s largest rail carrier, Ukrzaliznytsia.

As reported, President Volodymyr Zelenskyi instructed the Cabinet of Ministers and Ministry of Infrastructure in September 2019 to develop a restructuring plan for Ukrzaliznytsia that provides for breakup of the company into three operators: infrastructure, freight and passenger, and production.

Minister of Infrastructure Vladyslav Kryklyi later promised to make a decision on the leadership of Ukrzaliznytsia in the near future.

According to Ukrzaliznytsia, the breakup of the company into three operators (freight, passenger, and infrastructure) is planned to be completed before the end of 2021.