Ukraine International Airlines (UIA) has optimized its passenger routes by adding new flights to its flight timetable and introducing a number of connecting flights.

UIA announced this in a statement, the CFTS portal reports.

"The flight timetable that was previously announced for the period until October 24 remains practically unchanged, with the exception of flights to Tbilisi, which were canceled because of the continuing epidemiological restrictions by the Georgian authorities. Within the framework of this flight timetable, UIA will offer its passengers convenient connecting flights when the entry restrictions on foreigners are lifted on October 1 and add new flights. This will give passengers the opportunity to expand their travel geography in Europe and the Middle East," the airline said in the statement. 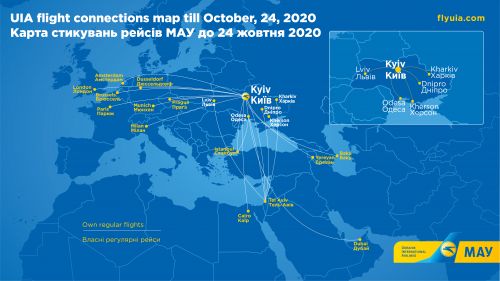 As the CFTS reported, UIA canceled and reduced some flights on September 1 after Ukraine imposed an entry ban on foreigners. According to the airline, the need to revise the flight timetable was primarily due to the Cabinet of Ministers’ decision to ban foreigners and stateless persons from entering Ukraine.