The Turkish company Baykar Makina has announced that it will donate three Bayraktar TB2 attack drones to Ukraine after Ukrainians crowdfunded UAH 600 million for their purchase.

The company announced this in a statement, the CFTS portal reports.

On Monday, 27 June, the drone manufacturer announced on Twitter that it would not accept payment and that it would send the Bayraktar drones to the Ukrainian warfront free of charge. "Baykar will not accept payment for the TB2s and we will send three UAVs free of charge to the Ukrainian war front. We ask that the raised funds be remitted instead to the struggling people of Ukraine," the company twitted. 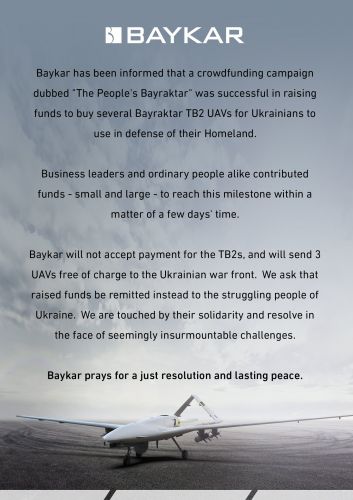