Ukraine International Airlines (UIA) plans to turn Ivano-Frankivsk airport into its regional hub. Aron Mayberg, the head of UIA's supervisory board, announced this on his Facebook page, the CFTS portal reports.

"It is expected that the gradual development of the hub will begin in 2017, if the airport will be ready and the agreement with the local authorities and the airport administration will be reached, as well as the five-year development plan will be approved by shareholders of UIA," – Mr Mayberg wrote.

Aron Mayberg had not announced the details of the project. However, he accompanied his post by a screenshot of the map with approximate areas, where UIA will try to attract passengers to the Ivano-Frankivsk airport. All these areas are in Ukraine, so it can be supposed that the airport would be only internal hub for UIA. Opportunities for launching international flights remain unclear.

Now Ivano-Frankivsk airport serves only internal flights. The most flights are operated by Dniproavia airline. UIA launched its regular flights between Kiev and Ivano-Frankivsk on October 25.

Ivano-Frankivsk airport handled 25,2 thousand passengers in 2014. The airport is situated near Carpathian Mountains. It can be attractive for tourists. 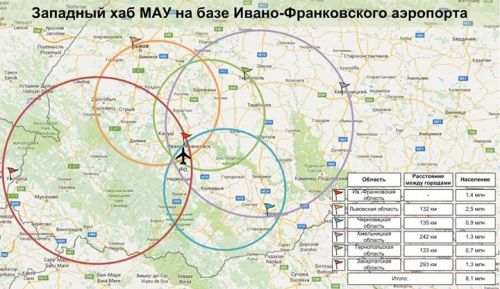