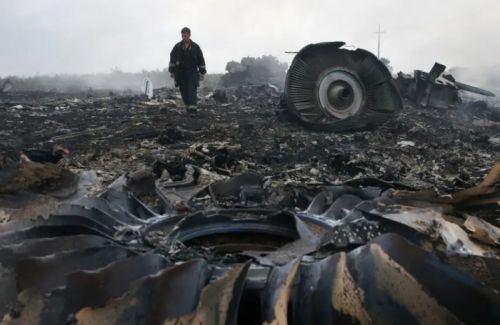 The District Court of the Hague has found suspects Igor Girkin, Serhii Dubinsky, and Leonid Kharchenko guilty of murder for their roles in the shooting down of Malaysia Airlines flight MH17 but acquitted suspect Oleg Pulatov.

Judge Hendrik Steenhuis announced the court's judgment at the Schiphol Judicial Complex in the Netherlands on 17 November, the European Pravda publication reports.

The court ruled that Dubinsky and Kharchenko were functionally involved in the delivery of the Buk air defense system from Russia for launching the missile, as well as for its evacuation. Before that, the court confirmed the Ukrainian version of the causes of the MH17 disaster, noting, however, that the primary target was supposed to be a Ukrainian military aircraft.

Kharchenko reported to Dubinsky about the use of anti-aircraft missiles and then carried out the order to remove them, the judge said, stressing that the defendants knew that launching the missile would lead to people's deaths.

The court also ruled that the intention to shoot down a military rather than civilian aircraft does not reduce the guilt of the accused. According to the court, the accused also had no right to attack a military aircraft because they were not combatants.

The judge ruled Girkin did not give the order to shoot down the plane. According to him, Girkin was responsible for the shooting down of Ukrainian airplanes and helicopters but intercepted conversations indicated he did not know about the launch of the Buk missile before it was launched.

However, according to the judge, the court considers his complicity as a leader in the murder of the 298 passengers and crew members of flight MH17 proven. There is no evidence that Girkin knew before 17 July that the Buk missile would be used, but it can be assumed that he imagined that there would be human casualties, the judge said.

"They are guilty 298 times," Steenhuis said.

The court found the fourth defendant, Oleg Pulatov, innocent despite being Girkin's deputy and instructing the other defendants to evacuate the Buk system. According to the judge, there is no evidence that Pulatov contributed to the performance of the task given to Dubinsky and Pulatov and the court decided that he had no functional connection to this case.

Commenting on the judicial process, Andrii Huk, a partner at the Ante law firm, noted that the court ruled that the Dutch prosecutor's office had jurisdiction over the case and could prosecute the defendants. "The fact that Ukraine delegated the investigation to the Netherlands is sufficient. Therefore, the nationalities of the dead or the defendants do not affect the jurisdiction and do not exclude it," he wrote.

In addition, the Dutch judges ruled that the conflict between the Ukrainian army and organized separatist groups of the self-proclaimed Luhansk and Donetsk “people’s republics” in 2014 was an international armed conflict because Russia fully controlled the "republics," coordinated their military operations, supplied weapons to them, and directly took part in the hostilities itself. "Does this give the defendants the immunity of combatants and can they be considered members of the Russian army? The court decided that they could not because the defendants and Russia denied they were military personnel," the lawyer wrote.