Kyiv expects to obtain a feasibility study for a Tram-Train project by the end of May this year, the Kyiv municipal administration’s Deputy Chairman Illia Sahaidak said.

"This project will allow a high-speed service to link residential areas on the left bank and the administrative/business core of the city, which will significantly reduce the transport time. According to calculations based on a transportation model, demand for the Tram-Train is about 240,000 passengers per day. The total length of the line will be 37.2 kilometers, of which 14.7 kilometers will be the infrastructure for the light rail. The remainder will be the railway infrastructure," the Kyiv municipal administration quoted Sahaidak as saying.

The Tram-Train will have two routes: the Myloslavska–Pivnichna route and the Darnytsia–Kiltseva Doroha route. Both routes will pass through the Darnytskyi railway bridge.

A tram-train is a light-rail public transport system where trams run from an urban tramway network to main-line railway lines that are shared with conventional trains. 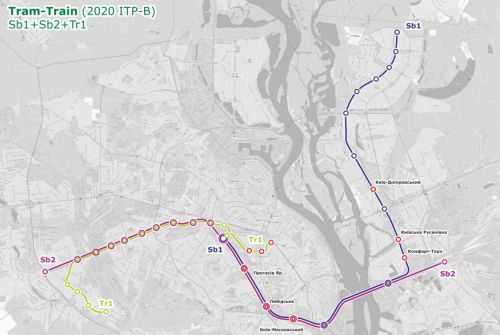